Check back for more information on this annual event.

Cristian’s Big Heart 5k celebrates the life of Cristian Acosta-Flores who passed away on September 1, 2014, one day shy of his 19th birthday. Cristian’s life was cut tragically short due to complications from an undiagnosed enlarged heart. The race sheds light on this important health issue but also memorializes the way Cristian loved and lived. His big heart always lent a hand, encouraged others, and cared deeply for those around him.

Learn how you can lend your heart and your legs to this fantastic event! 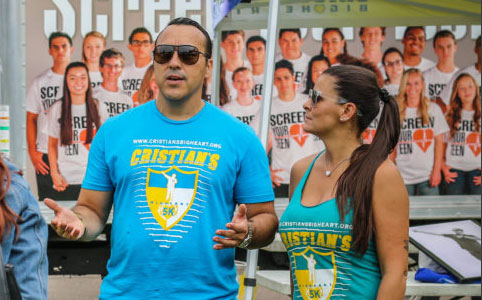 William and Tanya Cruz, Founders
“When we lost Cristian, we had no idea about the incidence of sudden cardiac arrest in youth,” said Tanya. “There’s nothing more devastating than losing a child, and we just didn’t want this to happen to another family.” The Cruz Family wanted to do more than raise awareness—they wanted to be part of a national movement to protect young hearts. They learned that sudden cardiac arrest could be prevented if we were more proactive in finding the undetected heart conditions that put youth at risk. Studies show the best way to detect heart conditions is with an EKG. But because they’re not part of standard youth exams, they decided to dedicate race proceeds to Screen Your Teen. “We’re committed to making a difference,” said William. “And until heart screenings are mandatory, we’re going to keep running!”